Indian Mathematical Inventions: Who Changed the World indian inventions Mathematics is the subject (science) that deals with the logic of size, quantity, calculation and arrangement. Mathematics is all around us, everything we do. It is a designated place for everything in our daily lives, including mobile devices, architecture (ancient and modern), art, money, engineering and even sports. It represents the high level of abstraction achieved by the human mind.

Mathematics has its roots in Vedic literature in India, which is about 4000 years old. 1000 BC And 1000 A.D. Between, various concepts on mathematics were given by Indian mathematicians. Which first included the concept of zero, techniques of algebra and algorithm, square root and cube root. There are various examples of mathematics of ancient India which are still applicable today.

Peter Gobbets, secretary of the ZeroGrindia Foundation or Zero Project, said, “Zero is widely viewed as one of the biggest innovations in human history, a cornerstone of modern mathematics and physics.”

Today, as much as students hate it, India had a major contribution in the field of algebra in ancient times.

We honor Siddhant (Sanskrit astronomical works) for his contribution towards the beginning of the Sine ceremony. Historians consider Aryabhatta, Brahmagupta, Bhaskara-I and Bhaskara-II to be the principal exponents of trigonometry. Bhaskar-I gave formulas to find the values ​​of the sine function for angles greater than 90o (obtuse angle). On the other hand, Bhaskar-II gave precise expressions to calculate trigonometric ratios of acute angles such as 18o, 36o, 54o, and 72o.

The Fibonacci sequence is a series of numbers where a number is found by adding two numbers before it. Starting from 0 and 1, the sequence progresses 0, 1, 1, 2, 3, 5, 8, 13, 21, 34 and so on. It was first described by Virahanka, Gopal and Hemachandra as an outbreak of Pingala’s earlier writings.

The history of measurement systems in India begins in the early Indus Valley Civilization, which is among the surviving specimens dating to the 5th millennium BCE. From the earliest times, the adoption of standard weights and measures shows the architectural, folk and metallic artifacts of the country. A complex system of weights and measures was adopted by the Mauryan Empire (322–185 BCE), which also made rules for the use of this system. Later, the Mughal Empire (1526–1857) used standard measures to determine land holdings and collect land taxes as part of Mughal land reforms.

A total of 558 weights were excavated from Mohenjodaro, Harappa and Chanhu-Daro, not including the poor ones. They did not find a statistically significant difference between weights, which were excavated from five different layers. The depth of each was about 1.5 meters. This was evidence that strong controls existed for a period of at least 500 years. The weight of 13.7-g is one of the units used in the Indus Valley. The notation was based on binary and decimal systems. 83% of the excavators from the above three cities were weight cubic and 68% were made of rag.

Mathematicians in Kerala made rules for second order interpolation to calculate intermediate sine values. Madhava, a Kerala mathematician, must have discovered the sine and cosine series about three hundred years before Newton. In this sense, we can consider Madhav to be the founder of mathematical analysis. Madhav (circa 1340 – 1425 A.D.) was the first to take decisive steps to treat his boundary-crossing from the finite processes of ancient Indian mathematics to infinity. The mathematician Madhava also discovered infinite-series expansions of circular and trigonometric functions and finite-series approximations. His power series for the P and Sine and Cosin works is referred to by reverence by later writers. 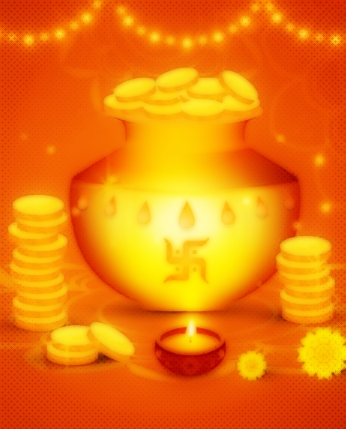 why we celebrate dhanteras